Clostridium difficile infection (CDI) is a significant cause of infections acquired by patients while resident in healthcare facilities and a significant source of cost, morbidity and mortality. Primary C. difficile infections (primary CDI) are estimated to exceed 300,000 hospitalized and over 250,000 nursing home patients each year in the US alone [7], and most often follow antibiotic therapy. Because the vast majority of CDI occurs in patients who have been recently treated with antibiotics in healthcare settings, the inferred mode of transmission involves the repopulation of antibiotic depleted niches in the gastrointestinal (GI) tract by spores shed by previous patients in the facility [14]. Once C. difficile bacteria become established in the gut they secrete toxins, toxins A and B, which bind to cells of the intestinal epithelium and cause the disease’s characteristic diarrhea. Toxins A and B bind to epithelia cells of the GI tract and cause massive fluid secretion, inflammation, and necrosis of colonic mucosa [17]. Although both toxins have cytotoxic effects, toxin B has been shown to be more cytotoxic than toxin A [18, 19].

Antibiotics used to treat CDI are more or less equally effective and include: (a) metronidazole, which has the potential to cause birth defects, and is not used with pregnant women, (b) vancomycin which is preferred for severe disease and can be administered rectally if the patient develops digestive propulsion difficulty (ileus), and (c) fidaxomicin which is considered most effective in those with severe disease and may be used in recurrent CDI patients and in patients who have not responded to other antibiotics.

Fecal bacteriotherapy, also known as a stool or fecal transplant, is effective in up to 90% of those for whom antibiotics have not worked. It involves infusion of bacterial flora acquired from the feces of a healthy donor to replace the normal, healthy colonic flora that had been wiped out by antibiotics. Though experimental there is considerable promise for fecal transplant as an important new intervention for CDI. Bezlotoxumab, a human monoclonal antibody that binds to and neutralizes C. difficile toxin B, was approved for the treatment of CDI by the FDA in 2016, and was introduced by Merck in the first quarter of 2017 as Zinplava™. It is given by injection and unlike the antibiotics used to treat CDI, does not disrupt or otherwise adversely affect normal bacterial flora.

Recurrent CDI is a serious healthcare problem. A challenging problem with CDI is a recurrence rate of approximately 20% after standard of care treatment with antibiotics [9, 11], i.e., shortly, 2 – 4 weeks after discharge 20% of successfully treated primary CDI patients will develop a second episode (recurrent) of CDI corresponding to an estimated 100,000 cases of recurrent CDI each year. 50-65% of patients that have experienced an initial recurrence will experience up to five (or more) additional recurrences [12] over a period of years, potentially leading to a lifetime of devastating diarrhea, weight loss, and increased morbidity/mortality.

Antibodies correlate with protection from recurrent CDI. Both toxin A and toxin B are thought to contribute to disease pathophysiology and in control studies the production by primary CDI patients of antibodies that bind and neutralize these toxins has been shown to protect against CDI recurrence [1, 20, 21]. The presence or absence of anti-toxin antibodies is therefore predictive of recurrent disease risk. This finding has led to development of the anti-toxin monoclonal antibody, Zinplava™ (Merck), for administering to CDI patients to prevent disease recurrence [http://www.mercknewsroom.com/news-release/corporate-news/fda-approves-mercks-zinplava-bezlotoxumab-reduce-recurrence-clostridium-]. Appropriate use of Zinplava™ will require identification of CDI patients whose immune systems have not produced protective anti-toxin antibodies. Unfortunately, most patients are discharged prior to the time, roughly 3 to 4 weeks after infection, when protective antibodies, if produced, would be reliably detectable in blood. Methods to detect anti-toxin antibodies at earlier times are therefore needed to distinguish patients who are at risk of disease recurrence (absence of anti-toxin antibodies) and will benefit from administration of the Zinplava™ prophylaxis, from CDI patients that produce their own protective antibodies, are not at risk of recurrence and will not benefit from Zinplava™. 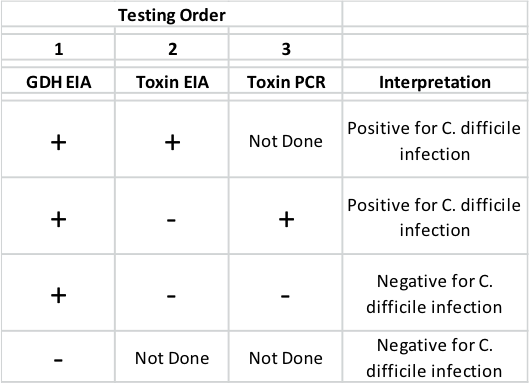 There are no products that diagnose susceptibility to recurrent CDI. Multiple methods are utilized for diagnosis of CDI including: (1) enzyme immunoassay (EIA) tests of extracts of patient stool specimens for the presence of toxins (A and/or B), and/or the C. difficile enzyme glutamate dehydrogenase (GDH), and (2) polymerase chain reaction (PCR) assays to detect toxin genes in the patient stool specimens [23 – 27]. Both PCR and GDH EIA are sensitive but GDH EIA has poor specificity yielding unacceptable frequency of false positive results and neither GDH EIA nor Toxin PCR assay discriminates colonization/carriage from active infection with C. difficile. Toxin EIA while less sensitive than GDH EIA or toxin PCR, is quite specific for C. difficile and is thought to provide a definitive diagnosis of active infection vs colonization. These deficiencies have led many clinical settings to adopt a three tier testing regimen as described in the table above. Importantly none of these diagnostic assays provide identification of CDI patients who are or are not at high risk of experiencing recurrent disease. An ideal test would be one that can confirm diagnosis of CDI while stratifying risk of recurrent CDI.

MENSA is a defined cell culture medium containing the newly synthesized antibodies secreted by ASCs harvested from the blood of subjects suspected to be infected with C. difficile. We measure the newly synthesized ASC antibody with a sensitive multiplexed Luminex™ immunoassay platform that measures the presence or absence of antibodies that bind multiple distinct C. difficile proteins, including the C. difficile toxins A and B that cause disease. The presence of ASC anti-toxin antibodies is a definitive indication that the patient will not experience a recurrence of the disease even if exposed to C. difficile, whereas the absence of ASC anti-toxin antibodies indicates that the patient is at high risk for disease recurrence if exposed to C. difficile, which would justify prophylaxis with Zinplava™. The MicroBplex C. difficile diagnostic is the only product that predicts likelihood of disease recurrence. Additionally, since MENSA is completely free of pre-existing antibodies and permit new infection with C. difficile to be distinguished from prior infection(s), results obtained with MicroBplex’ C. difficile diagnostic augments other assays, e.g., GDH EIA and toxin PCR with patient stool samples, by distinguishing active infection from colonization. A distinction that is critical to determining appropriate therapy. Lastly, since ASCs cease to be formed and disappear from blood circulation once the C. difficile pathogen has been eliminated, the resulting absence of MENSA ASC anti-C. difficile antibody provides an indication of successful therapeutic intervention.